Vietnam Communist Party General Secretary Nguyen Phu Trong’s upcoming visit to Washington comes at a critical juncture for Vietnam and a time when a confluence of domestic, regional, and geopolitical factors are giving increasing salience to the importance of expanding and protecting civil and political liberties in the country. The most important step in making the case for human rights in Vietnam is to convince the country’s leadership that better rights will generate significant benefits for Vietnam both domestically and in the international arena.

While there is no use in overstating progress, political and civil freedoms in Vietnam have improved significantly in recent years. These improvements are due to decisions and calculations by party elites and to the determined efforts of a diverse set of rights champions operating within and outside the party itself. Today, the party presides over a country in which political and civic freedoms are being openly discussed and debated, through admittedly more often online than in the public square. Vietnam’s increasingly pluralistic and open political culture should be recognized for what it is: an emerging strength that sets it apart from more repressive regimes like China’s.

As Vietnam’s leading ideologue and the author of such statements as “our regime must never change,” the congenial and soon to retire Trong might strike some as an odd choice to travel to Washington, particularly given the high stakes. But this is Vietnam. A country where party elders must be respected, party conservatives must be placated, and where pantomimed expressions of unity must be performed continuously before statues of the famous patriot Ho Chi Minh, who would no doubt cringe at his contemporary religious deification.

Vietnam’s political leaders have an historic opportunity to improve the country’s economic performance, bolster their legitimacy, and vastly enhance the country’s international standing. To do this they must strike a new balance between the need to protect rights and the need to ensure social order. Three areas deserve particular attention.

Freedom of speech. Vietnamese within and outside the party have found their political voice and they are unlikely to relinquish it. The Internet has emerged as a lively platform for public analysis of official news and has reawakened Vietnam’s rich tradition of social criticism, debate, and intellectual exploration. While party elites bristle at Internet whistle-blowers and despise anti-party haranguing, the Internet nonetheless provides unparalleled opportunities for expression and openness. Arresting and intimidating bloggers and rounding up dissidents under draconian anti-sedition laws will not deliver Vietnam the civilized knowledge-based society its leaders envision or earn the country international respect. Releasing dissidents and protecting the free flow of ideas will.

Freedom of association. The party began as an illegal organization committed to the causes of social justice and national independence. Protecting freedom of association need not be seen as a threat to the party’s survival. Surely a party that traces its heritage to struggles against brutal exploitation on French rubber plantations should recognize that sole reliance on employer-dominated trade unions is likely to place the interests of employers and investors before those of workers. Vietnam’s workers are not revolutionaries. They want decent wages and their basic rights to be respected.

If the Trans-Pacific Partnership (TPP) trade agreement is successfully negotiated among the 12 member countries, both Vietnamese workers and employers will benefit. By strengthening rights and protection for its workers, Vietnam can attract new investment and build a reputation for social responsibility, distinguishing itself from competitors. Increased freedom for labor unions will likely be required before the U.S. Congress will ratify a TPP agreement that includes Vietnam. But the main reasons for doing this should be to promote the rights and livelihoods of Vietnamese workers and enhance Vietnam’s attractiveness as a destination for foreign investors who take labor rights seriously.

Beyond the shop floor, independent research organizations should be encouraged rather than suppressed. Silencing criticism and dissent is self-defeating. Similarly, permitting peaceful protest under principles of enlightened policing and zero tolerance for unruly behavior should be chosen over arrests, brutality, and intimidation. The appeal of ultra-nationalist and radical groups will decline if ordinary Vietnamese are granted their natural rights to to peacefully demonstrate and petition their government.

Freedom of the press. Absent a substantially independent press, accountability and transparency suffer. When a tiny circulation newspaper reported that a member of the party’s anti-corruption commission had accumulated properties through illegitimate means it was the editor who was pressured to resign. And yet a more independent press is precisely what Vietnam needs if it is to improve state responsiveness and combat and reduce corruption. Policies are needed to promote press freedoms, not suppress them. Reformist members of Vietnam’s political establishment should prevail upon their conservative colleagues to abandon their proposals to further restrict press freedoms.

This year marks 20 years of normalized U.S.-Vietnam relations and 40 years since the conclusion of the two countries’ disastrous war. It also marks the 70th anniversary of Vietnam’s Declaration of Independence, in which Ho Chi Minh famously announced the birth of a free and independent Vietnam. This was followed by the 1946 constitution, which promised freedom of speech, freedom of association, and a free press. Since 1945, Vietnam has travelled a long and difficult path. If Vietnam’s leaders can embrace a real commitment to rights, a strong, prosperous, and independent Vietnam is well within reach.

Dr. Jonathan D. London is a professor in the Department of Asian & International Studies and Core Member of the Southeast Asia Research Centre at the City University of Hong Kong. His publications include Politics in Contemporary Vietnam (2014 Palgrave Macmillan) and the forthcoming Routledge Handbook of Contemporary Vietnam. Follow him on twitter @jdlondon1.

This essay is presently featured on the Asia blog of the US-based Center for Strategic and International Studies. http://cogitasia.com/getting-rights-right-at-vietnams-crossroads/ 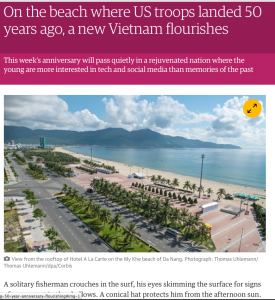