“Politics is the art of making the impossible possible”

In 2017 North Korea’s missile and nuclear tests and the inflamatory words of president Donald Trump and chairman Kim Jong-un put the word on edge. After a flury of diplomacy in 2018, prospects for peace and reconciliation have rarely seemed higher. What seemed to be well-founded pessimism amid “war brinkmanship” has suddenly turned into optimism – giddy in some quarters – that peace on the Korean peninusla may finally be at hand.

Seemingly well-deserved bad publicity for both Trump and Kim has swiftly turned into a wave of praise. Yesterday’s “despot Kim” is today “Kim the young talent. Whether playing to Trump’s incessant need for praise or not, South Korean president Moon Jae-in’s quip that Trump is “deserving of a Nobel peace prize” has generated waves on its own. There is a certain surreal quality to what is occurring, and the intrigue continues.

April 27, 2018 was an historic day in Korean history as the two Korean leaders met and signed a joint statement in Panmunjom, confirming that a complete denuclearization of the Korean peninsula is the common goal (or at least common stated goal) of the both Korean states.

Chairman Kim Jong-un told president Moon Jae-in “if we meet so often and build confidence with America, if we end the war and commit not to invade each other, why should we live in fear of nuclear weapons? Kim Jong-un pledged “I’m determined not to repeat the painful history of the Korean war, and I promise that we would never use force again…Living together on the same homeland, we should never spill blood again”. Kim Jong-un then decided to change the time zone of Pyongyang to that of Seoul.

Witnessing the historical moment when the two Korean leaders sign the joint statement in Panmunjom, KIA director Suh-hoon could not hold his tears. 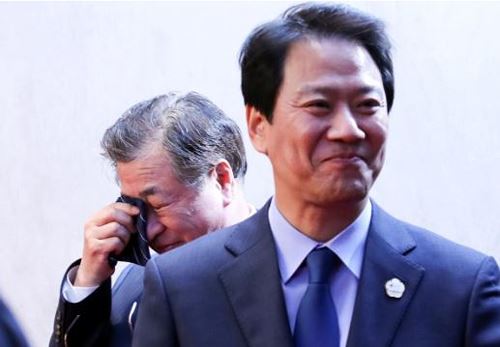 According to the New York Times (April 29, 2018), the next day (April 28) president Moon Jae-in phoned president Donald Trump to brief him on the result of the inter-Korean summit. Moon Jae-in quoted Kim Jong-un as saying “The PRK would give up nuclear weapons if the U.S. agrees to end the Korean war and pledges not to invade Korea”.

Kim Jong-un also said he would invite experts and journalists from South Korea and the U.S. to North Korea next month to monitor the suspension of nuclear tests there. Moon Jae-in also told Trump that Kim Jong-un understood him and the two countries could live in peace and happiness together. Moon Jae-in advised Trump to meet Kim Jong-un the sooner the better, to follow up on the momentum of a successful inter-Korean summit. Moon Jae-in also phoned Japanese Prime Minister Shinzo Abe (April 29) to advise him that Kim Jong-un is willing to talk to Tokyo.

Earlier, Mike Pompeo (as CIA directory and now newly confirmed US State secretary) visited Pyongyang to meet Kim Jong-un (April 1, 2018). Pompeo told ABC (April 29, 2018) that his meeting with Kim Jong-un went very well, that Kim is seriously prepared for denuclearization of the Korean peninsula, and has a specific roadmap for this. Pompeo confirmed “When I left, he understood exactly the work as I describe it today. The U.S.’s objective is a complete denuclearization of the Korean peninsula, verifiable and irreversible”.

In fact, the door to peace and reconciliation was opened up during the XXIII Olympic Winter Games (Pyeongchang, February 9 to 25, 2018). On this occasion, Kim Jong-un’s sister Kim Yo-jong delivered to Moon Jae-in a personal letter from Kim Jong-un. The Pompeo-Kim meeting was in preparation for the coming Trump-Kim summit (in late May), to follow up on the successful Moon-Kim summit in April 27, which has laid the foundation for a peace process.

President Donald Trump told Bloomberg (April 29, 2018) that Kim Jong-un “was not kidding”, and he would meet Kim “in 3 or 4 weeks” (likely in Panmunjom). Kim Jong-un and Donald Trump have exchanged nice words and mutual respect (totally different from last year). They have shown mutual understanding of their wishes, and confidence in the success of the coming meeting. However, public skepticism often dies hard, until written commitments are signed or even until specific actions are taken to follow up. That is why both sides need time to build mutual confidence and goodwill for peace and reconciliation.

It seems Kim Jong-un has been able to take this hard fact of life with pleasure as if he has proactively prepared for it in advance. Indeed, he appears to have has unexpectedly embraced the process, exhibiting a deftness that has surprised some and intrigued virtually everyone.

While outcomes of the flurry of diplomacy remain uncertain, it seems clear that direct negotiation between the U.S. and North Korea was and remains an inevitable step in the process to of resolving the crisis. Be that as it may, the tensions that led to the current diplomacy are in part an outcome of the nuclear threat from North Korea’s use of nuclear blackmail and brinkmanship. This was and remains a dangerous if calculated gambit.

A new game of thrones

While it remains unclear whether and to what extent Donald Trump and Kim Jong-un are sane or mentally unfit as reported they appear, for the moment, unwilling to die. For a negotiated solution to occur, Washington and Pyongyang will have to talk directly and that is now occurring.

Significantly, it has been Seoul that has played the intermediary (instead of Beijing). Perhaps, that is why Xi Jinping and Kim Jong-un rushed to meet in Beijing (March 25-28, 2018) before the inter-Korean summit and the US-Korean summit talks. There are reasons for both Trump and Kim to meet to “dilute” Chinese influence over Korea. From this perspective, it is possible and even likely that Kim went to Beijing not for reassurance or rapprochement, but to appease Beijing and to play the China card as a counterbalance before Kim would meet Trump. When North Korea tested nuclear bombs, the Chinese were anxious. Now that Trump is going to meet Kim (without being arranged by Beijing) Xi Jinping may be feeling anxieties of a different sort.

Now, Kim Jong- un is himself playing with world powers, using Xi (the “Red Emperor”) into a trump card with Trump. According to David Shambaugh (a top China watcher), Xi Jinping and Kim Jong-un are “not a happy couple”. New York Times also reported (April 22, 2018) that Kim Jong-un wanted to reduce Chinese influence on Korea, while Beijing is concerned that China has been sidelined from the power game during recent Inter-Korean summit and the coming US-Korean summit talks (in late May 2018). If the US-Korean summit is successful, Pyongyang may escape being dependent on and controlled by Beijing. Conversely, if the talks fail, Pyongyang risks being punished by both China and the U.S.

In such a context, Kim needs to ensure Trump understands exactly his position and intention, while somehow managing to avoid alienating  Xi. This, it would seem, is mission improbable; success would seem not only on the whims of Trump and Kim but on the talents, limitations, and decisions of advisors on both sides.

Events on the Korean pinnisula are moving fast. In a flash, Kim Jong-un has appeared on the world stage for the first time and has in many respects had a successful debut with credit, too, to telegenic sister and brain Kim Yo-jong by his side as his right-hand advisor.

Now, summit watchers might worry more about Trump than Kim, as Trump is known to be unpredictable and undisciplined as a true loose cannon. Worse, Trump is understaffed with less experienced aides (particularly from the State Department) and John Bolton in the mix, too.

According to Moon Jae-in, “Seoul is trying to create a line of communication between the U.S. and North Korea” and he is playing a key role to make sure Pyongyang and Washington are getting even closer.

Korea watchers would agree both Pyongyang and Seoul want to reduce Chinese influence on the Korean peninsula. By arranging for Kim Jong-un to meet Donald Trump, Moon Jae-in is helping Pyongyang move away from Beijing and achieve degrees of freedom from its influence. If Kim Jong-un and Moon Jae-in can do this, not only Korea’s destiny but also Northeast Asia’s (and Southeast Asia’s) geo-political picture would be changed.

According to the New York Times (April 22, 2018), as China is sidelined from the coming US-Korean summit talks, there is a growing fear in Beijing that the outcome may be either North Korea or (someday) a reunified Korea leaning toward the U.S, reducing China’s influence in the region. While Kim Jong-un has decided to suspend nuclear and missile tests, Moon Jae-in is working hard for gradual reunification. If he succeeds in facilitating a deal between Kim Jong-un and Donald Trump, in the form of “normalization of bilateral relations” in exchange for “denuclearization of Korean peninsula”, for example, the geo-political landscape of East Asia and its balance will indeed have changed. Stay tuned!