If what has been going on in the Korean peninsula recently has attracted the attention of the world, what has just taken place in Malaysian politics is equally unexpected. Though the two events are different, they both reflect the indeterminacy of the new world order in which no country is an exception (including, even, Vietnam).

Many well informed about Malaysia may be shocked, but nor are they surprised by the defeat and disgrace of Prime Minister Najib Razak, for his corruption scandals have truly angered Malaysians and have reminded Malaysians and the region of such notorious kleptocrats as Marcos and Suharto. On one level it seems history keeps repeating itself. Malaysian people power has arrived.

But the success of the (unlikely) coalition between Dr Mahathir Mohamad and Anwar Ibrahim – who was notoriously sacked and imprisoned, both by his present partner Dr Mahathir (in 1998) and (later, in 2015) by Najib is no less dramatic. Reality is indeed often stranger than fiction.

Taking a step back, there must be compelling reasons for Malaysian voters to vote a 92 year old former autocrat and (his former) prisoner (jailed twice) into power. And yet somehow the feel is different than the elections of Mr Donald Trump or Rodrigo Duterte.  Not all populisms are based on fear and paranoia. Some rise with demands for accountability and political accountability.

Mahathir Mohamad (at 92) promises to change the system he had set up.

According to The New York Times, the political change in Kuala Lumpur following the historic election of May 9, 2018 is a “political earthquake”. As recently as a few months ago, few people would predict Prime Minister Najib Razak and the ruling Barisan Nasional coalition would lose, even when Najib Razak has been accused of big corruption. But this unexpectedly outcome has indeed unfolded, and in dramatic fashion. Even the victorious opposition party was shocked. Nor was this earthquake limited to KL.

What happened? Most basically, given an historic opportunity, Malaysia voters turned out in record numbers (14.5 million voters), delivering the opposition coalition (Pakatan Harapan) led by Dr Mahathir a majority of 113 of 222 seats in parliament, and leaving the ruling coalition (Barisan Nasional) led by Najib Razak a humiliating 79 seats). Now, Dr Mahathir has returned to power at the age of 92, as “the world’s oldest elected head of government”. (Malaysia Elections Everything You Need to Know About a Political Earthquake, Angie Chan, New York Times, May 17, 2018).

The story is a strange one, if not downright weird. Dr Mahathir Mohamad was UMNO leader and Malaysian Prime Minister from 1981 to 2003 (for 22 years), had formerly sponsored Najib as the next prime minister, and before that had sponsored Anwar as his deputy prime minister, before sacking and jailing Anwar on made-up charges. In a news conference, following the election Dr Mahathir offered a half-apology:

“The biggest mistake that I have made in my life was choosing Najib… You know the mess the country is in, and we need to attend to this mess as soon as possible… The rule of law will be fully implemented”.

It is a half apology because it was Mahathir’s imprisonment of Anwar that presaged Najib’s rise to power. Nonetheless, now in disgrace, Najib Razak, his wife, and other senior officials of the outgoing government have been banned from leaving the country. Najib’s home has already searched by the police.

To beat Najib Razak and restore “a new new order”, Dr Mahathir has cooperated with the opposition party he had once suppressed. On May 9, 2018 when he was pardoned by the King (at Mahathir’s request). Today Anwar’s wife, Wan Azizah Wan Ismail, has taken her place in the new government as a deputy prime minister, while waiting for Anwar to return to politics. According to Wan Azizah, Mahathir has agreed to stand aside midway through his five-year term for Anwar to succeed him as the next prime minister. 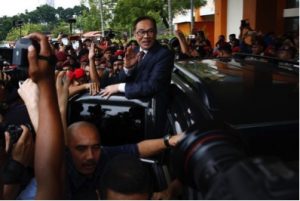 Anwar Ibrahim is waiting to be the next prime minister

Anwar Ibrahim claims he was put in jail by Dr Mahathir for political motivations. But now, he is willing to forgive Mahathir and is ready to work with him to bring “a new dawn” to Malaysia, a country where genuine political rights has been assiduously suppressed.

While Pakatan Harapan is an unlikely and uneasy coalition, it is a remarkable and uncommonly brave one. For only through Dr Mahathir’s cooperation with Anwar’s People’s Justice Party (as the largest party in the coalition) was it possible to create a force strong enough to beat Najib Razak and an entrenched system that has benefited under his corrupt administration. Now that power has been wrenched from Najib, Malaysia finds itself with a genuine multi-party political system. But whether Mahathir is (this time around) a reformer is less certain.

Nor should this possibility be ruled out. Malaysian voters have voted for Dr Mahathir, at 92, precisely because there has been an understanding that Mahathir would serve as a “transitional” prime minister for two years to rebuild the government and pave the way for Anwar to succeed him. And Anwar, it would seem is a popular and genuine reformer. Still, the plan for “mid-term” power transfer remains an x-factor, and may ultimately depend on Dr Mahathir’s himself. (Malaysia election: Anwar Ibrahim’s future still in Mahathir Mohamad’s hands, Adam Harvey, China Morning Post, May 16, 2018).

It has been widely observed that democracy and human rights have not fared well in Southeast Asia, particularly in countries widely regarded as ripe for transitions to democracy. From the Philippines where journalists have been assassinated and drug users exterminated extra-judicially (by President Rodrigo Duterte) to Cambodia where the opposition and the news media have been suppressed (by Prime Minister Hunsen) to Myanmar where Rohingya muslims have been the subject of genocide, forever damaging the reputation of Aung San Suu Kyi. What, then, does Malaysia’s turn mean?

In domestic politics, how Dr Mahathir’s new government behaves remains an open question. It is difficult for members of Mahathir’s multi-party coalition government to share with him a common vision on different issues, except their common interest in deposing Najib Razak’s corrupt government and Barisan Nasional’s grip on power. Now that Mahathir (at 92) is again prime minister, he has the rare opportunity of correcting mistakes of his earlier tenure as prime minister and autocrat.

For his part, Anwar Ibrahim has declared his full support to Mahathir and (of course) his wife, Mahathir’s deputy prime minister. This is a new alliance of two (or perhaps three) veteran politicians, including the odd couple of Mahathir and Anwar: mentor and protégé turned rivals and now allies. In the meantime, Anwar plans to go on the lecture circuit to leading universities around the world to spread the message of “moderate Islam” and, one would expect, the merits of more democratic and transparent politics.

Nor does the significance of recent developments stop in Malaysia. For international politics, Mahathir has addressed China’s extensive influence and investment in Malaysia, saying that his government would need to study the agreements made by Najib and that he was concerned about the size of Malaysia’s debt to China. As for the Belt and Road program, Mahathir said the new government would have no problem, but he would not like to see too many warships in the area, as “warships attract other warships”. Anwar’s view on China is similar to that of Mahathir, as he is not against Chinese investment, but he is also concerned about the manner some of the deals were made. (In Malaysia, the Old Prime Minister Promises a New Order, Richard Paddock, New York Times, May 10, 2018).

More broadly, the developments in Malaysia remind us of the indeterminacy and possibility of politics. Suddenly, Malaysia is a country of possibility. That’s good news for Malaysians and interesting news for us all.