I’ve been inactive as of late… …. but on the occasion of Prime Minister Nguyễn Xuân Phúc’s trip to Washington I wrote something for the Center for International and Strategic Studies CogitAsia blog… the results are below… 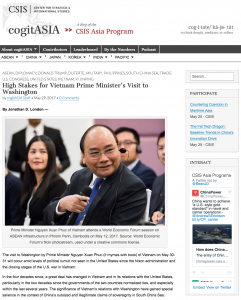 The visit to Washington by Prime Minister Nguyen Xuan Phuc (it rhymes with book) of Vietnam on May 30-31 will occur amid levels of political tumult not seen in the United States since the Nixon administration and the closing stages of the U.S. war in Vietnam.

In the four decades since, a great deal has changed in Vietnam and in its relations with the United States, particularly in the two decades since the governments of the two countries normalized ties, and especially within the last several years. The significance of Vietnam’s relations with Washington have gained special salience in the context of China’s outsized and illegitimate claims of sovereignty in South China Sea.

Relations improved so much that, by the end of 2016, one could confidently assert that in trade and security matters, Vietnam and the United States had come to view each other as indispensable strategic partners. And then came the U.S. election. As with much of U.S. foreign policy, things today are less certain.

Within the Vietnamese political context, the trip is significant as it represents hard-fought efforts of more reform-minded elements in Vietnam’s ruling Communist Party to reach out to the United States. U.S. authorities would be wise to recognize this reality. While only Vietnam can determine its political path, working with Hanoi in a constructive manner will generate benefits for the future of Vietnam-U.S. relations and for the Vietnamese people.

With respect to trade, the challenge is to find a path to “win win” outcomes. Like many countries, the United States is Vietnam’s largest export market. What is striking is the rapidity of growth in Vietnam’s trade with the United States and the growth of its exports in particular.

Today Vietnam exports more to the United States than any other Southeast Asian country. By the end of 2016, trade in goods (not including services) between the two countries had reached $50 billion annually, and it is projected to increase to $80 billion by 2020. Notably, exports to the U.S. account for roughly a quarter of Vietnam’s total exports.

As the American analyst Vu Quang Viet has pointed out, Vietnam’s true export surplus with the United States is overstated in these figures, for the simple but important reason that a large (though not yet determined share) of Vietnam’s exports to the U.S. and other markets are in such items as Samsung cell phones and Intel computer chips, to whose final value Vietnam-based processing adds only 5 to 8 percent. In 2016, customs data report Vietnam exported $42 billion dollars-worth of hand phones and $19 billion in computer equipment. Be that as it may, Vietnam’s trade surplus is a bright shiny figure in some quarters of the U.S. administration.

Given Trump’s disposition toward trade, one might ask why the Vietnamese would wish to even broach the matter. The answer requires a wider lens and, indeed, recognition that the United States and Vietnam have good reason to expand and diversify their trade links.

While one may debate the merits of the Trans-Pacific Partnership, the Vietnamese government desires to deepen its economic ties with the United States and scores of U.S. firms desire the same. Vietnam’s relatively low costs and other features make it an attractive destination for investors. For Vietnam, U.S. investment holds the promise of boosting employment, infrastructure, and growth.

In the best of outcomes, expanded economic ties could assist Vietnam in avoiding the fate of being just another low-cost, high-pollution, labor-abusing export platform.

Might Washington do good by Vietnam in encouraging the country to move in the right direction by encouraging its government, for example, to forego its plans to construct scores of coal fired plants in favor of projects relying on less polluting technologies, drawing on U.S. technology, investment, and know-how? Or even, perhaps, to make better use of its offshore gas reserves?

A second and no-less important matter is security and, in particular, how Vietnam together with the United States and other countries can promote the realization of an East Asian maritime security environment that conforms to international law. In this area, cooperation between the two countries continues, symbolized by the recent U.S. delivery of coast guard vessels. These efforts should continue.

As much as President Donald Trump enjoys waxing optimistic about Chinese president Xi Jinping’s character, recent signs from Beijing reflect aims that run counter to U.S. interests. The Vietnamese have rightly insisted that peace can only be secured by peaceful and legal means.

Xi’s reported announcement to Philippine’s president Rodrigo Duterte that the oil in the region is “ours” speaks volumes. The United States, Vietnam, and other interested parties need to persuade Beijing to take a more sensible path. Strikingly, there is no country with which Vietnam’s security interests align more closely than with the United States. Given Trump’s penchant for arms deals, there would seem to be scope for cooperation here.

A final, less tangible, and thus easily overlooked aspect of the Vietnamese prime minister’s trip should not be neglected. This concerns Phuc’s uncertain place in Vietnam’s political and economic development and whether and to what extent he becomes a significant force in the country’s development moving forward.

In recent years, the pace of economic reforms in Vietnam has slowed. This has owed not only to habitual reticence of conservatives but equally to the calamitous rise, missteps, and misdeeds of a particular and new breed of Vietnamese political elite who have preached reform and even democracy, but have ruled on the basis of personalistic ties, opaque and irresponsible business practices, and repression. For true reformers, the result has been a “lose lose” situation that has been at once exhausting and dispiriting.

In this context, those committed to real reforms in Vietnam have come dangerously close to being crowded out. Calls for political reforms by prominent members of the Communist Party that had gained certain force in the last few years have been muffled.

Whether by coincidence or plan, the Trump administration’s announcement that it does not assign priority to human rights has been followed by an intensification in the harassment and internment of rights advocates in Vietnam.

While the Communist Party’s ideological guardians have recently called for increased dialogue with dissident voices, an atmosphere of crushing conservatism has prevailed. This, in the view of most observers, is bad news for the future of reforms in Vietnam. In this context, one might ask what good the prime minister’s trip to Washington might hold.

When the prime minister meets Trump he will formally extend an invitation to the president to visit Vietnam on the occasion of the November Asia-Pacific Economic Cooperation meeting. The meetings will be held in Danang, a stone’s throw from the prime minister’s home town, and the site of the U.S. marines’ landing some 52 years ago.

Not known for his charisma, the prime minister is nonetheless a rare element in Vietnam’s contemporary political elite. While lacking flare and being regrettably soft-spoken with respect to the promotion of rights, he is at least a person with real reform ideas. More importantly, it is he who will listen to what Trump has to say on key issues that concern Vietnam and report back to Vietnam’s collective leadership. As such, one would hope the White House, Congress, and other leaders will speak with a clear and earnest voice and demonstrate their commitment to vigorous bilateral ties.

Only the Vietnamese can decide their future. And yet when Vietnamese citizens express hopes and worries about their country’s future, the matter of Vietnam-U.S. relations is never far from the discussion. When Vietnamese citizens express aspirations for a more pluralistic and democratic politics, a freer press, and a greater respect for human rights they have historically looked to America for direction. When Vietnamese policy makers and business leaders search for ideas, they often draw ideas from U.S. experience. When Vietnam’s growing ranks of professionals search for ways forward in the fields of education, health, and science, they learn from the United States’s successes and failures.

Looking beyond the politics of today, we observe that Vietnam and the United States have a great deal to gain from a strong relationship. In the fields of trade and defense, the two states’ interests closely align. Beyond this, Vietnamese both within and outside the country’s political establishment desire a more democratic, transparent, and rights-based social order. These are or once were, lest we forget, American ideals. At last the American and Vietnamese peoples have something to fight for together. In the interest of a strong relationship that benefits the peoples of both countries, let us hope they succeed.