Yesterday I attended a conference entitled “40 Years of National Unification and the Cause of Reform, Development, and International Integration of Vietnam.” It was an interesting experience. An academic conversation 39 years and 363 days later.

The conference had two main sessions, one in the morning one in the afternoon; the first addressing the “greatest victory of the 20th century of the Vietnamese people under the leadership of the Party,” the second on the country’s achievements of the last 30 years of reform (yes, 30 years of reform!). What lies ahead for this country of 94 million remains unclear. What is clear is the country has come a very long way in 39 years and 363 days, though perhaps not far enough to comfortably say that it has fully come to terms with its past. 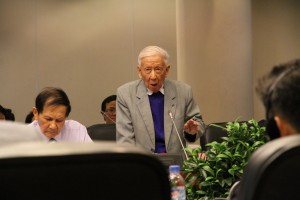 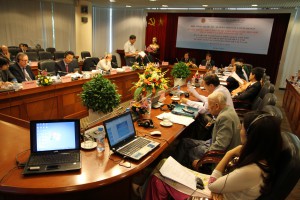 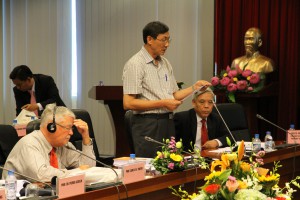 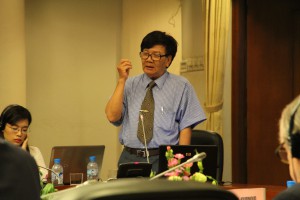 These last statements might be considered controversial and even objectionable among Vietnamese authorities, among whom I have many friends. I say it because while Vietnam has indeed come along way, the traumas of multiple wars and its social and political legacies have yet to be addressed in a manner consistent with the admittedly fuzzy notion of ‘national reconciliation.’ Then again, millions of bombs and deaths across several decades followed by two decades of isolation and a penchant for Leninism will do that to a country.

Listening to the papers yesterday I would say that, by and large, the spirit and content of the discussions were more introspective than 10 years ago. And yet the tendency to embrace a single “correct” narrative clearly remains. Differences are expressed on the margins. At the end of yesterday’s conference a comrade/gentleman from the Police Research Institute gave a brief and well articulated paper festooned with references to ‘political security,’ ‘internal Party security,’ ‘ideological security,’ and so on. Liberation?

Over the past few years I have expressed the view that Vietnam is on a path toward a more open political society. But the thought police are still there in force. My personal hope is that in the ten years between now and the 50th anniversary of the 30th of April 1975, and hopefully much sooner, the Communist Party of Vietnam will at last recognize the benefits of a more open, transparent, and pluralistic political culture; a Vietnam in which ‘internal party security’ is not permitted to douse, stomp on, and stamp out reasoned and open debate.

One reason to be skeptically optimistic is the very strong appetite in Vietnam these days for speech about a “just, democratic, and civilized” Vietnam. I do not think its just talk. But I also am of the view that the sort of political vision and courage needed to put the country on the road to a more comprehensively independent, democratic, and prosperous social order in Vietnam are still lacking. The greatest obstacles to Vietnam’s development really are institutional.

I do not believe the brightest, most forward-looking people in the Communist Party of Vietnam have China or Russia or Singapore in mind for their preferred political and social model. Brighter Vietnamese know that Russia is run by a Mafioso, that Beijing’s expansionism is real, and that Singapore is boring. Nor do I assume they desire America’s bankrolled version of ‘the best democracy money can buy,’ with large swathes of the population left neglected in countless ugly suburbs and burning ghettos.

Social democracy is the most promising path for Vietnam and comes closest to the true aspirations and will of the Vietnamese people. Can social democracy be built in a developing country? Conservatives will say no until someone says no to them.

Whatever Vietnam becomes over the next decades will be the result of political decisions made by the Vietnamese themselves, within and outside the Party. The more deliberative, transparent, and public these decisions are the more confident I will feel about Vietnam’s social, political, and economic future.

Today I was asked to comment on Vietnamese General Party Secretary Nguyen Phu Trong’s upcoming trip to Beijing…. I’m no Carl Thayer, but here’s what I had to say:

Trong’s trip is an important opportunity for he and Xi to establish greater clarity on relations between the two states, particularly though by no means only with respect to the East Sea. In the past, Chinese leaders have always seemed to present Vietnam with a combination of “carrots” and “sticks” and there is no reason to expect this to change. At present, China appears intent on using “infrastructure diplomacy” to gain favor with countries across the region and around the world together with provocative displays of military expansion. Xi is also going full steam ahead in efforts to change the status quo by unilateral means, most notably by building up installations in disputed areas.

For Secretary Trong it is an opportunity to state his positions and his views of his own party to China in his own terms and to explore areas of mutual interest in party-to-party relations, ideology, the emerging global situation, and Vietnam’s relations with US in particular. The strategic calculus of the talks will be different this time however, in part owing to China’s aggressive behavior and challenges to Vietnam’s sovereignty and in part owing to the ability and willingness of Vietnam to collaborate with other regional and world actors in promoting its legitimate rights and interests.

As in the past, Trong is likely to hear a combination of seductive offers of assistance and threats of collaborating with “external” powers. Trong’s warm personality and great interest in cultivating stronger ideological ties are likely to result in a public display of friendship and solidarity. Nguyen Phu Trong and the Communist Party of Vietnam recognize the importance of having good and stable relations with China. The Party – and it is hoped Trong, too – also recognize that though China is a large and powerful country, a subordinate relationship based on outdated the principles of “big brother dominates little brother” are not in the best interest of  mutually beneficial relations.

Perhaps not the most nuanced analysis, but my two cents for the moment.