I am pleased to announce the publication of Politics in Contemporary Vietnam: Party, State, and Authority Relations (2014, Palgrave/Macmillan, 272 pages) edited by myself, with contributions from several prominent analysts of contemporary Vietnam.

The book can be purchased at the Palgrave website and other familiar outlets, such as Amazon. Please find additional details below. You can click here or on the image below for a PDF of Chapter 1, which has been released by the publisher as a sample chapter. Vietnam’s political development has entered an extraordinary, if indeterminate, phase. Politics in Vietnam, long a predictable and dour affair, are today characterized by a sense of uncertainty and possibility that has no precedent in the country’s post-war history. Comprising contributions from leading Vietnam scholars, this volume comprehensively explores the core aspects of Vietnam’s politics, providing fresh perspectives on one of East Asia’s least understood countries.

The collection focuses on a variety of themes including the development and decay of the Communist Party of Vietnam, the evolution of relations between central and local authorities in the context of economic globalization, the functions of representative institutions, the activities of political dissidents, the growth of incipient forms of secondary association and civil society, and state repression. Unlike much of the scholarship on Vietnam, the contributions in this volume consider Vietnam in light of broader debates concerning politics in Asia.

Jonathan D. London is a professor in the Department of Asian and International Studies and Core Member of the Southeast Asia Research Centre at the City University of Hong Kong. His recent publications include research articles in the Annual Review of Political Science, The Journal of Contemporary Asia, The Pacific Review, and Social Science & Medicine. London is also editor of Education in Vietnam (2011, ISEAS) and author of numerous reports, analyses, and essays addressing an array of social, political, and economic themes in contemporary Vietnam.

I am pleased to share with you the introductory chapter from Politics in Contemporary Vietnam: Party, State, and Authority Relations, edited by myself and which is in press and available for purchase at fine bookstores everywhere, including the publisher’s website as well as the usual outlets, such as Amazon. To my knowledge, it is not yet available in Vietnam, though one can never be sure about these things! 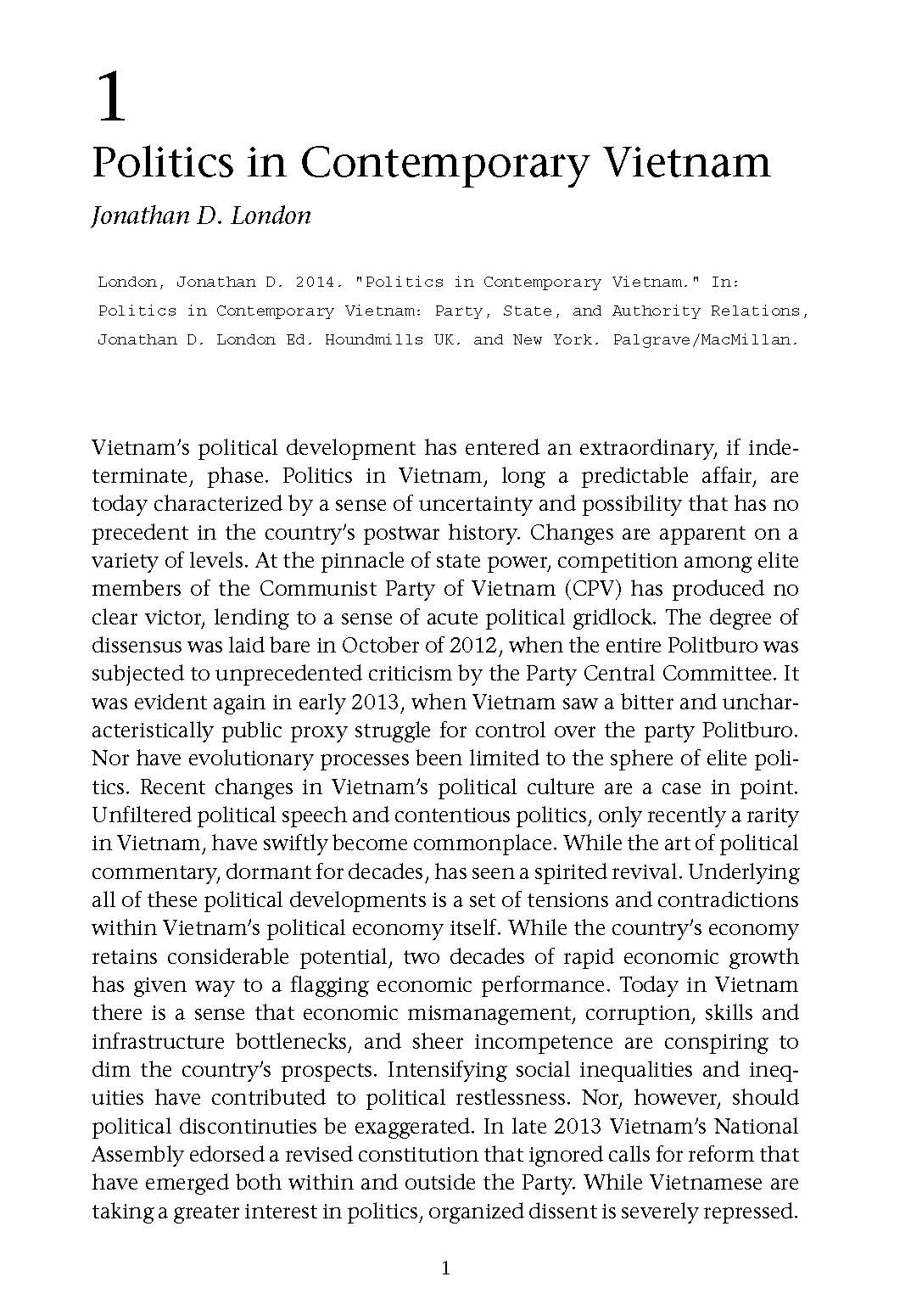 Please note, this is a sample chapter that was made available to the public by the publisher on its website. But please also note that this is copyrighted material. If you spot any typos or errors, please do not let me know!

In future weeks I may provide brief descriptions of the other chapters in the volume along with some discussion. This volume was written for for an academic audience and as such there is a greater than zero likelihood that you will encounter what Booth (Booth 1979, 277) memorably referred to as “Greek–fed, polysyllabic bullshit” . That said, I hope you find it useful.